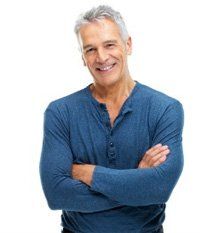 Here at Hobgood Facial Plastic Surgery, facelifts are one of the most popular cosmetic procedures requested by both male and female patients. They are a restorative procedure, giving patients a way to look and feel younger by restoring skin in the neck and face to a more youthful appearance. While the procedure is performed in the same way for men and women, there are certain aspects that pertain only to male patients.

Anatomically speaking, men have a different facial structure than women. The cheek bones and jaw line are more defined, the brow is more prominent, and the Adam’s apple around the neck. Men also grow hair on their face and neck, which will keep growing after surgery.

It is common for facelift patients to also get a neck left at the time of their procedure, so surgeons have to be aware of how they are making incisions and how they lift the skin around the cheek bones, jaw, and Adam’s apple. If they aren’t careful, the patient can have a tight face that will be uncomfortable and an obvious “plastic surgery look” to it.

Areas where facial hair grows will also need to be watched. If a surgeon is careless about his placement with such areas, a patient could end up having to shave in areas where he didn’t have to previously. For example, skin lifted and placed behind a patient’s ear would result in the patient shaving in that spot.

Compared to women, men usually have short hair and hairlines that recede further as they age. Facelift incisions are usually made along the hairline, so the surgeon will need to be mindful of where he places the incision. Usually this is done by making the incisions at the spot where the ear connects with the head or under the chin, where it will be less noticeable.

How Men Benefit From Facelifts

As men age, the skin begins to lose collagen and elastin, causing the skin to become loose. Gravity and stress then cause the skin to sag, giving a tired, worn appearance, especially around the middle portion of the face. Bags under the eyes become more prominent, the jaw line becomes less defined, and wrinkles begin to appear around the eyes, nose, and mouth.

Facelifts reverse these aging effects by tightening and contouring the skin around the jaw line and chin while also lifting the areas around the eyes and cheeks. The result is a restored face that looks younger and more rejuvenated with improved facial definition.
An improvement in a man’s physical appearance can do wonders for his self-confidence in all areas of his life. Women aren’t the only ones concerned with how they look to others; men feel that pressure, too. An improved self-confidence and self-image can lead to improvements in other areas, as well, such as in the office or in the dating scene.

This procedure is one of the most common ones performed in our office and has a high level of patient satisfaction. Dr. Todd Hobgood is a specialist is facial plastic surgery and has over ten years of experience in treating areas of the face, head, and neck. His private practice in Scottsdale, AZ treats patients from all over the country and has a highly professional staff dedicated to providing you with the best experience possible.

If you are interested in finding out more about the facelift procedure and how it can benefit you, contact us at (480) 418-6415 to schedule an initial consultation. We can conduct consultations in person at our office or online through our website. Let us help you restore your face to its younger self by making an appointment today!