How to Deal with Your Rhinoplasty Dressings 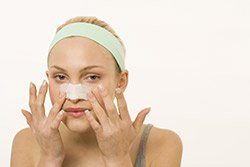 It is common for rhinoplasty patients to have a cast on their nose after surgery. Most rhinoplasty surgeries involve restructuring the cartilage and bones inside the nose, which will have to be held in place while they heal to prevent the need for additional surgery. If you have ever had a cast before, you know that they are important in keeping your bones together while they heal after a break. Casts give your bones additional support, but they also provide an extra layer of protection against further injury. A nasal cast works in the same way, just on your face.

Typically, a nasal cast starts with a layer of tape on the exterior of the nose. This layer has several purposes: it helps contain the swelling so your cast isn’t uncomfortable and doesn’t loosen too early, it creates a base for the cast to form, and it protects your skin from the material used to create the cast.

Next, comes the casting material, which is similar to those used by medical doctors to treat broken arms and legs. It isn’t as heavy or as thick as that material because that much weight on your face could cause some serious problems with your neck and nose. The stuff used on your nose is a little lighter and thinner to give your nose protection and support without weighing down your face.

Once the casting material has been added and shaped to your nose, it is allowed to dry until it is hard, which completes the cast.

Dealing with Your Cast

Your nasal cast will require a bit more care and caution than an arm or leg cast because it isn’t as thick. The nasal cast is still hard, but it’s also vulnerable. Running into things, bumping your nose, even accidentally hitting yourself in the face can cause additional damage to your nose, despite the presence of the cast. Be aware of your surroundings and move carefully to avoid banging your nose.

You should also be careful of getting your cast wet, just like with an arm or leg cast. Getting your cast wet could cause it to become loose and could even make it fall off before your nose has healed enough. You can still wash your face and your body with the cast on if you avoid the area near your nose completely. Patients typically try taking a bath instead of a shower and spot-clean their face.

Over time, your cast will start to loosen on its own. This is perfectly normal, but it also comes with a new frustration: the urge to pull on the cast. It’s really important that you don’t do this! Your cast is becoming looser because the swelling is going down and your nose is healing, but it won’t be ready to come off all at once. Picking at the cast to help it come off sooner could cause damage to your nose and set back the healing process.

People who have worn casts before know that they can become quite annoying the longer you have to wear them. Nasal casts are no different. The good news is that unlike a leg cast, nasal casts can come off in as little as a week. Your surgeon will determine whether your cast can come off during one of your follow-up appointments based on how your nose is healing. When your cast is ready to come off, your surgeon simply pulls it off.

After the Cast is Removed

Congratulations! You have made it through your initial healing after rhinoplasty surgery. Your nose is starting to look normal again and you’ll get to have your first look at your nose since the surgery. Your nose will probably still be a little bruised and swollen and won’t look perfect yet. Don’t worry! As your nose continues to heal, the bruising and the swelling will go away and your nose will look better with each passing day.

With Arizona lifting its stay-at-home order, Hobgood Facial Plastic Surgery is open for all surgical and nonsurgical procedures, including consultations at our office. We're following all state and CDC safety guidelines and taking extra steps, including social distancing, face masks worn by staff at all times, and an option to check in from your car. Send us an email or call (480) 418-6415 to request special accommodations. We still offer virtual consultations for patients who prefer to limit their visits to our office.